For several years, Oversecured has been the best way to discover vulnerabilities in Android and iOS mobile apps. We are always carrying out research and improving the quality of our detection. In the middle of the year, we realized that Oversecured was ideal for regular apps, such as banking or messaging. Still, our rules and checks covered only a small percentage of the Android system APIs that privileged apps can use. This meant we might miss a large number of vulnerabilities when scanning apps of this kind.

And so it was time for us to fix the problem, and ensure our checks covered absolutely all system APIs! As a result, the Oversecured Android vulnerability scanner now supports two environments: Google and Samsung. In the process, we have discovered tens of Samsung vulnerabilities and a few on Google.

Do you want to check your mobile apps for these types of vulnerabilities? Oversecured’s mobile app scanner provides an automatic solution that helps to detect vulnerabilities in Android and iOS mobile apps. You can integrate Oversecured into your development process and check every new line of your code to ensure your users are always protected.

Start securing your apps by starting a free 2-week trial from Quick Start, or you can book a call with our team or contact us to explore further.

We also give all new users two free scans, so they can check any apps for vulnerabilities! You can do this on the New Scan page.

You can see that if you decompile an obfuscated app, some code is nonetheless not obfuscated. For example, standard Android operations such as working with an Activity. This is because that class is part of the standard Android APIs. When any app is run, the /system/framework/framework.jar file is loaded into its class loader, where the class android.app.Activity is declared. This is the reason why no obfuscator can rename standard calls to this and many other classes.

Thus, all the standard Android APIs are in .jar files in the following directories:

We began by gathering all the .jar files from these directories on Google Emulator API 33 and decompiling them, merging all the resulting source code. That gave us all the code to begin our investigation. The next step was to find out which among tens of thousands of classes were APIs that could present a security risk if they were handled improperly. How could we do that? It was very simple!

Android has lots of standard managers: ActivityManager, TelephonyManager, and others. These, in their turn, use system services that are not usually visible to developers. We can say that all these managers are just pretty, convenient wrappers around lower-level system services, which actually provide all inter-process communications. And these system services are AIDL interfaces working in the privileged system_server. Only some services, like NFC or Bluetooth, are processed by separate and less privileged system apps.

A list of all the services that an app can access can be obtained by running the following code:

The system reports more than 250 services. The result for the emulator is as follows:

As an example of AIDL interaction, we can consider reading data from the clipboard. This is done using the interface android.content.IClipboard.getPrimaryClip():

Static fields beginning with TRANSACTION_ are generated automatically for each method when the Java class is generated from the .aidl file. To see the method code, you only need to open the decompiled source and examine it.

The security of all AIDL operations is based on permission checks at the implementation level for each interface method. The AIDL server knows the UID (and therefore the package name) of the calling app and checks that the caller has the required permission.

As another short and simple example, we can look at the method for rebooting the device, android.os.IPowerManager.reboot(). Its implementation is in the file com/android/server/power/PowerManagerService.java:

If an app that calls this method does not have the android.permission.REBOOT permission, the method Context.enforceCallingOrSelfPermission() will throw a SecurityException and the device will not reboot.

As we said, our research began with Google Android installed on Google Emulator. We studied all interfaces and all their methods, to find which were privileged and create rules for the Oversecured Android scanner regarding improper interaction with them. We also created rules for all managers and other classes that work with these interfaces internally. It should be added that our manual audit of all interfaces also found absent or vulnerable checks for various actions (such as reading or altering various data or the device configuration). We have sent reports of these bugs to Google.

Oversecured was previously based on a large number of well-known approaches to static and dynamic code analysis, but the main feature was dataflow analysis. The scanner examined all an app’s possible execution paths and the data propagation in it. This is an excellent way of finding most, if not all, vulnerabilities in Android and iOS apps.

But when we were studying the system API functionality we realized that the mere fact some piece of code is executed could be a danger. As we saw, rebooting the device requires the android.permission.REBOOT permission. But what if an attacker can force a privileged app to execute this code? It will lead to a vulnerability!

Next, we chose to extend our rules to cover Samsung’s Android, because we already worked with it last year and discovered 18 vulnerabilities in pre-installed apps, of various levels of criticality. Our experience working with Samsung’s VDP was very positive.

We performed the same actions:

The scale of the changes amazed us! Almost every key class was changed in one way or another. For example, there are around 400 system services, and many service AOSPs are extended. The reasons are good ones:

The main differences between the Google and Samsung versions of Android, from the security point of view, are:

In the process of studying the changes, we also found some funny vulnerabilities. One example is in the backup service (android.app.backup.IBackupManager), file com/android/server/backup/BackupManagerService.java:

As you see from the screenshot, isBackupEnabled() is an AOSP method. The permission android.permission.BACKUP is required to find out whether backups are switched on or not. But Samsung added a custom method semIsBackupEnabled(), which returns the value with no checks at all.

We created an additional scanning environment to support this version of Android. Then we added rules to search for vulnerabilities in Samsung Android, the list of built-in permissions, and protected broadcasts. We ran the scan in the new environment:

As an example of the scan results and of Android’s fragmentation, here is a vulnerability we discovered using a dataflow to control flow analysis of the Samsung Android Framework, in the patched file com/android/server/StorageManagerService.java: 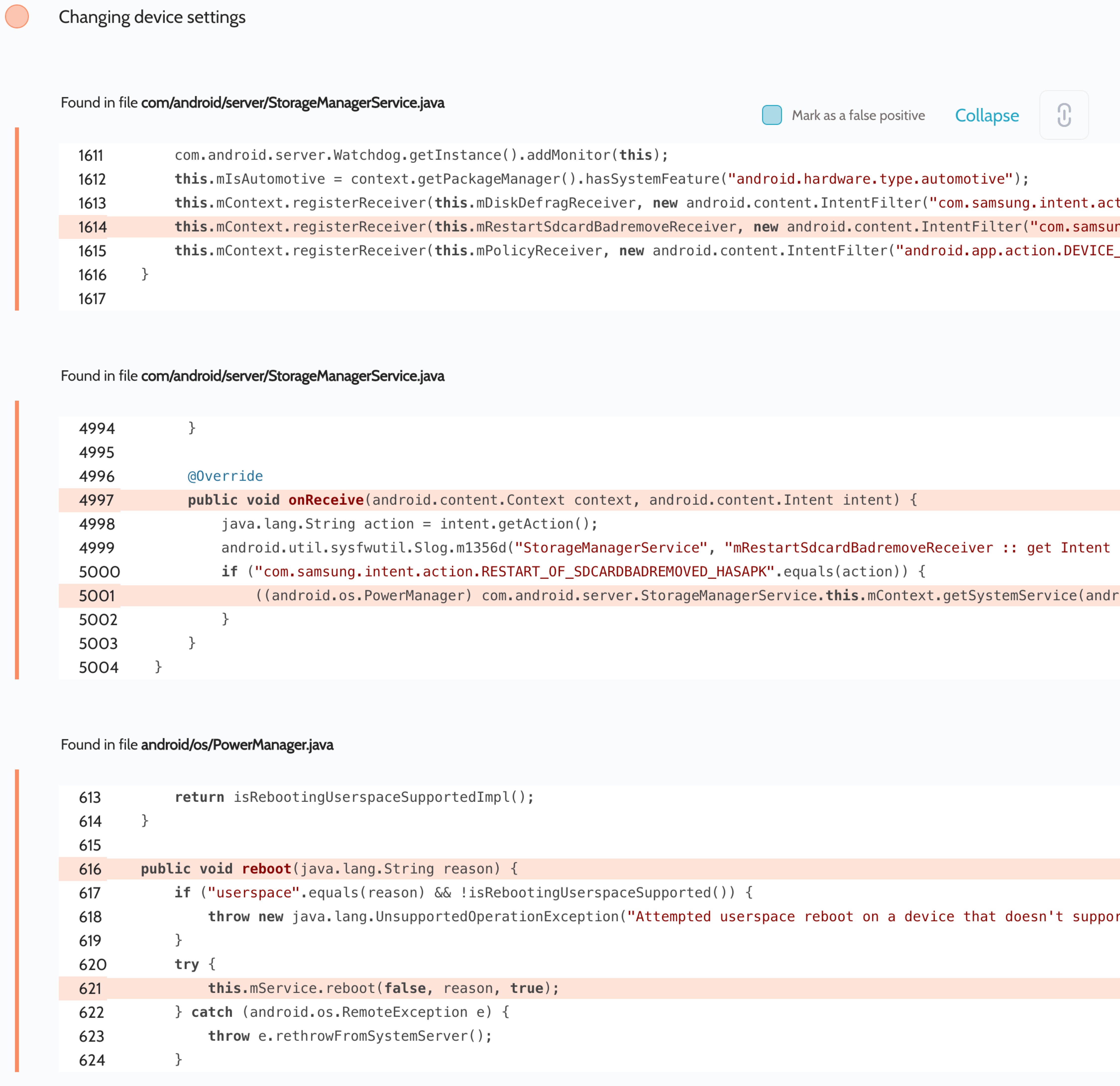 When the user sends a broadcast with the action com.samsung.intent.action.RESTART_OF_SDCARDBADREMOVED_HASAPK, the device automatically reboots — sidestepping permission restrictions.

An example of system app fragmentation is a vulnerability in the Settings (com.android.settings) app. Samsung extended the com.android.settings.homepage.SettingsHomepageActivity class and added custom code that allowed a third-party app to access arbitrary activities:

In a regular app, this would lead to the ability to access only within it, but since Settings has UID 1000 (system), the vulnerability led to access to any non-exported activities of any apps. This type of attack was previously called LaunchAnyWhere.

We revealed a large number of security problems in the Samsung ecosystem, and we have informed Samsung’s VDP. So far Samsung has fixed more than 60 vulnerabilities, but there is still a large number outstanding.

It can be challenging to keep track of security, especially in large projects. You can use the Oversecured vulnerability scanner since it tracks all known security issues on Android and iOS including errors when working with files. To begin testing your apps, use Quick Start, book a call or contact us.